Matt is an experienced Perth-raised biotechnology executive currently based in Philadelphia, USA. He has been the founding CEO or Executive Director of a number of pharmaceutical and health tech companies including iCeutica Inc, Botanix Pharmaceuticals, Churchill Pharma Inc, Dimerix Biosciences, Emyria, Respirion Pharmaceuticals and Orthocell. He has led the development of four products that have received FDA approval and has more than 25 years legal, IP and investment management experience.

Matt has worked as an investment director for two venture capital firms investing in life sciences, technology and other sectors, and was general manager of Australian listed technology and licensing company ipernica (now Nearmap ASX:NEA), where he was responsible for the licensing programs that generated more than $120M in revenue.

Todd Shand, Wrays’ Principal has had the privilege of working with Matt on a variety of projects over many years. He sat down with Matt to find out more about his career and more importantly, how a Perth boy ends up in Pennsylvania!

Todd: Can you tell us about your company Botanix and the work you’re doing with CBD at the moment?

Matt: Botanix was founded in 2016 as a dermatology company, focusing on the novel use of cannabinoids. Cannabinoids are chemicals that were originally found in the cannabis plant. There are more than 100 of them that potentially have some therapeutic use. We found some literature that suggested that CBD, (which is the second most common chemical after THC), could be useful in indications like acne and other skin diseases.

Without the availability of animal models, (as there’s no other animal that gets acne other than humans), we moved pretty quickly to clinical trials. Australia was a great place to do that, because of the regulatory system and availability of Phase 1 units. Botanix now has a technology that delivers drugs into the skin efficiently and a number of different CBD-based programs in acne, rosacea, and some antibacterial/anti-microbial applications. We’ve been able to demonstrate that CBD is really safe when applied to the skin, kills bacteria effectively and reduces inflammation. All those things are really important for different dermatological diseases.

What prompted the move to the U.S.?

I moved to the U.S. because we sold a company called iCeutica which we started in Perth with some co-founders James Williams and Liddy McCall, using some University of Western Australia technology to make drugs smaller and help them perform better. We sold that to a private equity firm based in Philadelphia in 2010. The original arrangement was I would go there for two years, establish the lab, hand over the reins and come back. Four years later I said to my wife “Well, what are we doing now? Are we staying?” We’ve been there for 11 years.

Working and living in the U.S. are there any lessons you have learned with regard to getting FDA approval for your products?

When I started in this industry, it was all about “How do you get a product clinically developed and then approved by the FDA?”. But the reality is, getting a product approved is an important step, but in the scheme of things, probably a minor step, because of the pressure that’s now on the insurance companies in the U.S. You can now only get reimbursement if you’ve got something that’s really novel, addresses a problem that needs to be solved, and does so in a way that saves the health system money. You can’t just be a slightly different, or a better version of whatever is out there.

From an investment point of view, that makes it really interesting because no longer are you investing in things that will give you a 2X, 3X return. You need to be investing in things that you are going to smash out of the park because not all of them will work, and not all of them will get reimbursed to the level that you think that they need to, to make money.

Can Australian-based biotech companies looking for a U.S. presence, manage those opportunities from Perth?

You can. There are good examples of that happening. You look at companies like OncoRes Medical, with Dr Kath Giles. Her advisory network is very strong in the U.S. She’s focused entirely on the reimbursement landscape for getting a product commercialised, separate from how she actually gets it approved by the FDA, and developing that infrastructure and those insights.

But if you’re going to commercialise a product in the U.S, you need US-based experience base of how to do that well. Australia remains a great place to develop early stages of drugs and conduct initial clinical studies, but for Phase 3, you need US patients in the study and there’s no getting around the fact that the biggest market is the US and so you have to do things the American way to get the American returns – that’s what investors are looking for.

As a venture capitalist, what attributes do you look for in a company that may predict future success?

To be honest, when I was a venture capitalist, I wasn’t a very good one, just because I had no operational experience and didn’t know what I didn’t know. Of course, in the pharmaceutical biotech world, it’s really US-centric and I knew honestly next to nothing about that. At the time, the things that I picked or got involved with probably weren’t the best decisions, but I guess over the last 15 years I’ve learnt something and understand better now what makes a good biotech pharma opportunity.

That’s a really interesting comment. I think it’s something that Australia doesn’t do as well as the US. Experience is gathered by making mistakes and having another crack and doing it better the second time. I think the US entrepreneurial mentality is a lot more tolerant and respectful of mistakes. You get your stripes from being successful obviously, but you also get your stripes from having a go and not being successful and learning from that. It is important to have a lot of different experiences to make yourself good at anything because you need context.

You sit across a number of companies. What do you look for in the people that you work with?

It’s a mix. You need very good scientists who understand the mechanism of the drug or the disease and on the commercialisation side you need people who know “Where do I get off this train?”.

One of my mentors uses the analogy of the train. Drug developments go from one end of the train track to the other end, but along the way, there are lots of different stops and you have to understand what those stops are – the value inflection points. You can stay on the train to the next station, or you can get off the train for some value and that value changes as edge towards the endpoint. Commercialisation has to have that understanding of what that the train track looks like in its entirety, but also how to make the value decisions. “How much money do I need to get to the next stage? What value do I get, if I get off at that particular point, or carry it to the next station on the track?”

What have you learnt along the way about developing career paths?

I was talking to my son the other day, who is thinking about his career. I gave him the example of my own career where I’ve had eight different types of jobs, and how I got to where I am now. There’s no study chart that you can follow to end up doing what I’m doing. I was saying to him, “You can have a degree, but once you’ve got that intellectual specialisation, you’ve got to be prepared to make jumps, to make leaps and get other skills and experiences to become whatever you’re going to become.”

I was a senior associate in a law firm, about to make partner, and I moved to a startup company. My parents just about had a heart attack, but I wouldn’t change it. I could be a partner of a national law firm today, but I probably wouldn’t be happy. You have to throw yourself in the deep end and see what happens, and if you do that enough times, you learn to swim fast.

Can you tell us about your new home town?

Philadelphia is one of the oldest cities in the US. It’s where the constitution was signed. It’s where Ben Franklin worked his magic. It’s where the Liberty Bell is. I can compare it to Melbourne versus Sydney, where New York is Sydney, and Melbourne is Philadelphia which in many ways, has a similar architecture and feel. It’s a great city to live in, the suburbs are very English with stone houses, creeks, big trees, deer and brooks. The city is placed beautifully between New York and Washington. It’s a central hub, and a lot of bankers and lawyers live in the Philadelphia area and commute to New York and Washington as a result. It’s also very sports-mad. We have the Philadelphia Eagles football team (who won their first Super Bowl the same season the West Coast Eagles won their last), an improving baseball team and the 76ers basketball team that features Australian Ben Simmons.

What do you miss about Perth?

The quality of lifestyle in Perth is unrivalled anywhere in the world. The beaches in New Jersey don’t hold a candle to what you can find in Western Australia, and the fact that you have warm weather and sunlight most of the year means you can be very healthy and outdoorsy. That entrepreneurial spirit in Western Australia obviously is really important, and my family is all in Western Australia, so I miss them as well.

Any final words of advice for our readers?

I recommend everyone at some stage in their lives read The Man in the Arena, by Theodore Roosevelt. It is about the importance of the guy who’s got dust and blood on his face, he tries and he fails, and yet he keeps coming back. It’s really good. In Australia it is something we should embrace more of, giving people opportunities and picking them up and throwing them back into the fight, as opposed to just standing on the sideline and criticising or saying, “It can’t be done.” 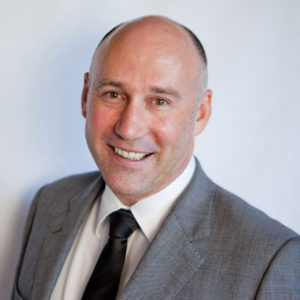