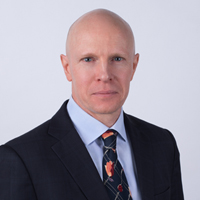 I have extensive international IP experience, having practised as a patent attorney in Europe for many years.

With a Bachelor of Engineering Degree with Honours from the University of Melbourne, I practise in the fields of patents, trade marks, and designs. My technical experience and expertise span a broad range of engineering technologies, including aeronautical and aerospace construction and components, medical devices and surgical instruments, prostheses and implants, mining and agricultural equipment, manufacturing processes and machinery, gaming machines and gaming systems, software architecture, clean energy, and consumer products.

My career in the patent attorney profession commenced in Melbourne during the 1990s, qualifying as an Australian patent attorney and a New Zealand patent attorney. Following 10 years practise in Melbourne, I moved to Europe where I was based in Germany for many years and also qualified as a German patent attorney (Patentanwalt) and a European patent attorney. Whilst in Germany, I became a partner of a leading patent and trademark attorney firm in Munich where I represented numerous German and European SMEs and multi-national corporations in the procurement and defence of their IP rights, specialising in examination, opposition and appeal procedures before the European Patent Office (EPO).

Upon returning from Europe to practise again in Australia in 2017, I was elected to the Council of the Institute of Patent & Trade Mark Attorneys of Australia (IPTA). In this capacity, I became Convenor of the Patent Practice & IP Australia Business Relations Committee, and Chair of a Working Group preparing submissions to IP Australia (i.e. the Australian Patent Office) on the patentability of computer-implemented inventions.